Between 50 and 70 million years ago, around the time dinosaurs went extinct, these funky mud balls called Septarian Nodules (aka Dragon Eggs) were born!  Today they are appreciated by many a lapadarist and rock collector.  In fact, Joel and Angela paid a visit to Joe’s Rock Shop in Orderville, Utah last summer, and they were given permission to camp and rockhound on their claim.  It was a hoot!  Click here to see their blog (scroll about 3/4 down for the part about nodules.)

The name Septarian comes from the Latin word septum, which means partition(s) between cavities.  Hence, the name Septarian nodule refers to the distinguishable cracks, angular spaces and jagged edges that formed within the mud ball.

Septarian nodules are a unique form of concretion that filled in with minerals, which then formed into crystals.  They are most commonly found as small as 1 inch, and as large as 1 foot wide. 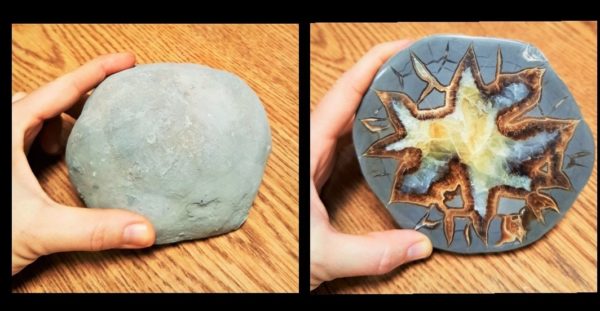 At first glance, Septarian Nodules appear to be a grey, oval or roundish-looking ball.  The outsides are limestone.  When cut open, we find an attractive contrast of 3 different minerals: the limestone, calcite (yellow to white) and aragonite (the brown that lines the edges of the cracks).  Dragon Eggs are known for their (usually) oval shape with outstanding druse inside.  On rarer occasions we find clear or white baryte present.

How did Septarian Nodules form?

First of all, nobody seems to know for certain!  There are a couple of strong-running theories.  This one seems to be the most popular:

Sea levels were much higher during the Cretaceous Period, and the Gulf of Mexico stretched all the way up into Southern Utah, where a majority of septarian nodules are found in the USA.  (They are also found in Madagascar.)  Within this expanse of water, little sea critters, some with shells and others without, were taken down by occasional volcanic eruptions.

The dead, organic material then sank to the bottom of the sea bed and started decomposing.  The minerals in the shells and such drew sediments to them, which accumulated around the dead material and formed nodules or mud balls.  It’s believed that the cavities eventually formed as a result of dehydration and shrinkage of the mud, although other folks suggest they may have been caused by the expansion of gases that were made by the decaying organic matter in the center of the nodule.

Another approach says they may have formed in shallow lakes, and as the tides came in and out, it built up layers of sticky mud that dried out as the water receded in the hotter months of the year.  The balls were then buried under sediment, where they experienced cracking and then eventually filled in with minerals.  Yet another idea claims the cracks may have formed from gases being released as the organic material inside decomposed.
(So… Who knows?!)

Septarian Nodules make attractive cabochons, polished slabs, pyramids, spheres, and the like.  We recently cut our own into slabs for the first time and they were rather crumbly in some spots, so we added the two-part epoxy called Opticon to all the slabs for sale on our website.  This will grind off as you work the stone, and helps keep it all intact so you can craft a handsome, finished piece!

Septarian nodule is easy to work with.  In our shop, we use silicon carbide belts & abrasives on on this material.  It takes a high polish with a compound like Zam.

Because of the 3 minerals that always occur within this ancient stone, Septarian is a powerful grounding tool that can help realign the root, sacral, and solar plexus with the rest of the chakras.

It will nurture or even awaken one’s connection to Mother Earth, increasing the ability to both see and receive the endless provision and blessings she provides.

Somewhat like Shungite, Septarian nodule stones activate the root chakra, and increased life-force energy will be channeled throughout the body.  One may experience an “inner awakening” when connecting with this stone, or witness drastic (positive) changes, and discover new, healthier habits replacing old ones that no longer serve you.